Miami, FL – 8/27/10 - In an effort to help client South Florida Commuter Services (SFCS) further their mission of reducing traffic congestion, commuting costs and emissions in the area, Diaz & Cooper expanded its digital cache for an event at Miami-Dade College’s Wolfson Campus. SFCS teamed with Miami-Dade College (MDC) and its Earth Ethics Institute to educate the MDC community about the time saving, money conserving and environmentally friendly benefits of an alternative commute in an effort to tackle the challenge of reaching this fickle demographic.

“SFCS was looking to engage and inform students and staff through an interactive media that captivated and motivated them to action,” said Nelly Navarro of SFCS. The creative and development teams at Diaz & Cooper responded to the challenge by utilizing innovative technology, online, on-location and guerilla advertising to engage students at various locations throughout campus.

The event has been an immediate success, especially the motion activated video wall and the interactive touchscreen featuring Beat the Traffic, an arcade style video game. Winners of the game are invited to register for a chance to a win a $50 gas card and can then explore the website, Get2MDC.com. Students have responded especially well to the gesture-based video wall, which invites passersby to learn how to save on their commute, then reveals the website address, as seen in this video.

Credelis Media Group was contracted by DCA to provide the equipment and hardware to run the touchscreen and video wall. The executions were all concepted, designed and developed in house by the Diaz & Cooper creative and development teams. 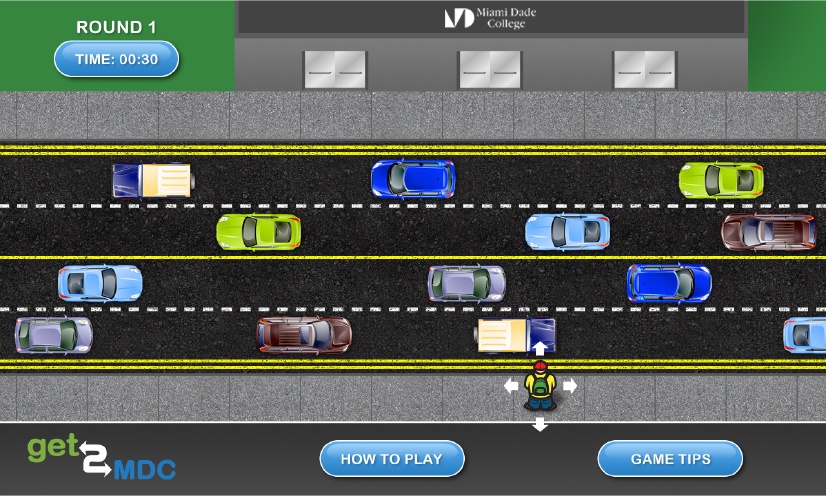 These innovative technologies were augmented by guerilla marketing executions such as LCD projections in parking garages and floor adhesives around campus that all directed observers to the website, which was fully designed and implemented by Diaz & Cooper to feature tips and strategies for a smarter, greener and cheaper commute.

The video wall, touchscreen, projections and floor adhesives will remain at the MDC Wolfson campus for a month in hopes of driving continued traffic to the website with the ultimate goal of reducing commuter congestion by means of carpooling, transit and alternative commuting methods.

With 8 campuses and over 170,000 students, Miami-Dade College is the largest institution of higher learning in the United States. Founded in the 1960s, MDC offers a diverse range of programs for both 2-year and 4-year degrees and flexible scheduling, allowing students to take classes at multiple campuses. For more information visit www.mdc.edu

Originally formed in 1993 as the Environmental Ethics Institute, Earth Ethics Institute is dedicated to promoting earth literacy and awareness of important environmental issues like global interdependence, ecological integrity through biological diversity and the natural processes that sustain life. EEI fosters these tenets through workshops, programs and resources for the Miami-Dade College Community. For more information visit www.earthethicsinstitute.org or call 305-237-3796

Latest Articles from Our Blog

The costs of inbound marketing can vary widely, and we're going to provide average price ranges based on the assumption that you want the highest-quality work to see real results.

Photo by krakenimages on Unsplash How Inbound Marketing is More Cost-Effective than Paid Advertising When you invest in a marketing...

Photo by krakenimages on Unsplash The Importance of Outlining What Marketing Success Looks Like What’s in it for me? That’s the question...

Photo by krakenimages on Unsplash Email Marketing Strategy for Inbound Success Inbound marketing is all about meeting customers where they...

Photo by krakenimages on Unsplash Co-Founder Omi Diaz-Cooper Talks Strategy in a Live “Ask Me Anything” Recently, DCA’s Co-founder, Omi...

Photo by krakenimages on Unsplash  How Inbound Marketing Can Boost Your Business Both inbound and outbound marketing strategies can serve...

Photo by krakenimages on Unsplash What is the Purpose of Inbound Marketing? Why is it Important? Inbound marketing is different from...

Photo by krakenimages on Unsplash Learn how inbound marketing strategies can grow your business. As a marketer, it's your goal to attract...

Photo by krakenimages on Unsplash Why You Should Hire an Inbound Marketing Agency Building a website, managing social media and designing...

Photo by krakenimages on Unsplash Tech Careers will boom over the next 10 years... The Fourth Industrial Revolution is reshaping the...

If you've ever purchased from Lindt, The Economist, FitBit, or Allbirds (just to name a few), then you've likely experienced the Shopify...

Diaz & Cooper Advertising Staff Have Been #ROWE Since 2012 Last year while a global pandemic ushered in an expansive and unexpected...

Photo by Austin Distel on Unsplash Google's announcement that it will block third-party cookies across its Chrome browser by 2022 has sent...

Now is the time to market for the post-COVID travel recovery. Here's why: It is no secret that the travel and tourism industry took a...

Diaz & Cooper Advertising is excited to announce that Retail Today has placed us in the exclusive category of 40 Outstanding eCommerce...

Photo by Bruce Mars We, like 2.3 million others, are a small business in Florida. Over the last 19 years, Diaz & Cooper has become known as...

During challenging economic times, the temptation to cut back on marketing can be overwhelming. This is particularly true of digital spend...

Named after the historic inland region of Southern Norway known for its vast forests and as the birthplace of Telemark skiing, Telemark, WI...

Conversion Rate Optimization (commonly known as CRO) is a method aimed to help you improve your website’s ability to convert passive...

This guide will help you make the most of your marketing dollars during the crisis. Browse through LinkedIn or any other social channel...

Photo by Anete Lūsiņa Is your website producing new leads that you can turn into customers? We know that email marketing is one of the...

Image courtesy of The Word Point As the battle for direct bookings becomes ever more competitive for hotels, Google is increasing its...

The Essential Website Accessibility Guide What do Beyonce, Domino’s Pizza and the Avanti Hotel have in common? They have all recently been...

Diaz & Cooper has been named as one of the Top 25 eCommerce Design and Development Companies of 2019 by DesignRush. Coming in at #7 out of...

The new Hertz© website was just in the news, but not for a good reason. According to “The Register” car-rental giant Hertz hired the global...

The sheer breadth of customer data available to the average seller today can actually become a problem. When your head is up in the...

We’ve all had those days when we’re super busy, yet have to send out countless emails to prospects, as well as publish blog posts and...

Any marketing plan works best when you start with a well-thought out strategic plan for business growth.  With a strategic growth plan,...

Creating an excellent product landing page should be high up on your priority list when you’re designing your ecommerce site. The ecommerce...

On a scale of 1 to 10, how important is your website to your travel business? If your site were to disappear overnight, how would it affect...

Here are 5 reasons you may be wrong. You and I know something pretty important about your website – you need it to convert more bookings....

Part 1: Search Engine Optimization Introduction There is no debate: Your website is one of the most important pieces of your business...

Remember the last time your coworker cracked a joke during a conference call and the entire room erupted in hysterics? How about the time...

goal: Increase Sales (Brand Website Bookings) the challenge: Generate bookings among the adult and couples market to drive occupancy during...